As communicated to you in safety notices dated August 14, 2017 and October 5, 2017, Kidde has determined that certain fire extinguishers can become clogged or require extensive force to activate, posing a risk of failure to discharge. In addition, the nozzle can detach with enough force to pose an impact hazard. As a result, the affected units are being recalled.

Plastic handle fire extinguishers: The recall involves 134 models of Kidde fire extinguishers manufactured between January 1, 1973, and August 15, 2017, including some models that were previously recalled in March 2009 and in February 2015. The extinguishers were sold in red, white and silver, and are either ABC or BC-rated. Models are as follows: 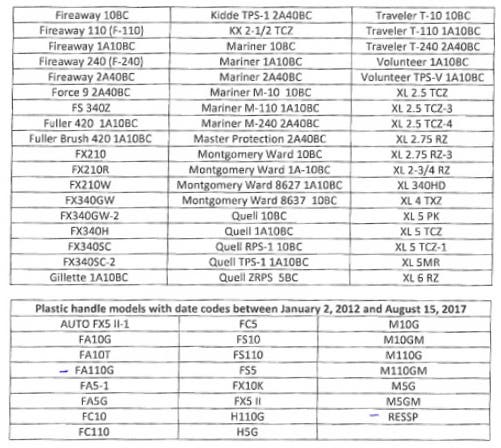 Push-button Pindicator fire extinguishers: The recall involves eight models of Kidde Fire extinguishers manufactured from August 11, 1995, through September 22,  2017. The no-gauge push-button extinguishers were sold in white and red and with a red or black nozzle. These models were sold primarily for kitchen and personal water craft applications. Models are as follows:
Push Button Recall Models:
Metal handle/valve fire extinguishers are NOT included in this recall. The unaffected models include the Kidde Professional line, Badger branded extinguishers and the recently introduced disposable metal handle/valve extinguishers.
If you receive consumer inquiries, please immediately direct them to contact Kidde at (855) 271-0773 between 8:30 a.m. and 5 p.m. EST Monday-Friday (excluding holidays), or between 9 a.m. and 3 p.m. during the weekend to determine whether their extinguishers are affected. They may also visit www.kidde.com.
Based on our stop sale notices, you should have already segregated and discontinued selling the affected extinguishers. If not, please do so immediately. All affected inventory should be returned to Kidde and a credit will be issued. The attached cross-reference list contains SKU numbers of affected units as well as their replacements, where applicable. An RMA number with instructions on where to send affected units is also included.
If you have questions, please contact your Regional Sales Manager. We apologize for any inconvenience this may cause and thank you for your cooperation in this matter.
Sincerely,
Chris Rovenstine
General Manager & Executive Director
Kidde North America
Search News
Clear All
Categories
Popular Posts